Sales of new vehicles by General Motors Co. and Fiat Chrysler Automobiles were down 10% year-over-year in the period from July through September, as dealers struggled to get new models on their lots due to the two-month shutdowns of auto plants.

Going into the fourth quarter of the year, a major selling time for automakers, industry experts are watching historically low inventory levels closely to see how they affect consumer purchasing decisions as they return to new-car showrooms in increasing numbers. Relatively few 2021 vehicles are on dealer lots even though it’s October. 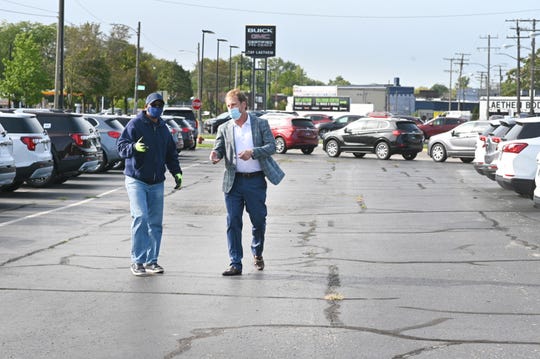 Jeff Laethem, right, of Ray Laethem Buick GMC, speaks with customer Ronald Johnson. At one point, the dealership was down to about 15 GMC models in stock. To put that in perspective, there have been single days when the dealership sold that many GMCs. “Now, luckily, there is an inflow and the minute that they come in, they’re just going quickly,” he said. (Photo: Max Ortiz, The Detroit News)

Overall sales nationwide are expected to drop year-over-year, but some dealerships expect to sell more vehicles than they did in 2019.

“Even though we were closed a couple months, we should surpass what we did last year,” said Walt Tutak, general manager at Matthews Hargreaves Chevrolet dealership in Royal Oak. “We were up 81% over the last month.”

Many customers extended their leases during the pandemic and are coming in to get new vehicles, he said.

Tutak has always tried to keep a deep supply of vehicles on the lot, which paid off when U.S. auto plants went dark during the early days of the pandemic. Inventories for all automakers have been tight as a result of the the shutdowns. Tutak began to see the crunch ease in September. 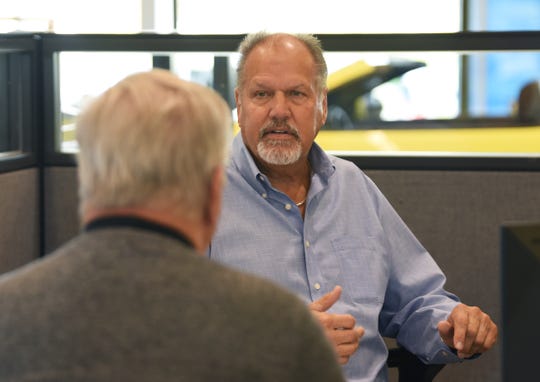 Walt Tutak, right, of Matthews Hargreaves Chevrolet, talks with customer Brian Scraggs. Tutak began to see an inventory crunch ease in September, and expects the dealership to sell more vehicles than it did a year ago, despite the pandemic. (Photo: Clarence Tabb Jr., The Detroit News)

“Everything we’re selling, we’re getting replaced,” he said.

The available supply of new vehicles has continued to fall since the coronavirus started to hit the U.S. hard in March when inventory levels were above 3.4 million, according to industry research agency Cox Automotive. Levels were below 2.2 million in mid-September.

And only 3% of vehicles on lots are from model-year 2021. At this time last year, 25% of vehicles were the new model year, according to Cox.

“It’s not only an issue of do we have enough overall inventory, but do we have the right inventory,” Charlie Chesbrough, senior economist for Cox, said during a Monday call discussing Cox’s auto sales forecast.

At one point Mark Trudell, general manager of Extreme Dodge Chrysler Jeep Ram in Jackson, says the dealership had just 25 new vehicles on the ground when he would typically have between 170 and 200.

“It made it very tough,” he said. “But a lot of that was predicated on when we got shut down here in the state, not too many of us ordered new cars. So we didn’t have cars in the system when things got up and running again, and then all of the sudden we had a couple of really good months.”

Trudell said Fiat Chrysler has been “very good” at trying to get as much inventory as possible to the dealership. They now have 75 new vehicles — and 50 of those are model year 2021. Like Tutak, he’s expecting 2020 sales to exceed last year’s.

Cox Automotive analysts expect 13.9 million new cars and trucks to be sold this year, after five consecutive years of 17 million-plus.

GM sold 665,192 vehicles in July, August and September. The automaker said its sales improved each month of the quarter, finishing September with year-over-year sales increases. GM noted that despite tight inventory, large pickups sold well. The Chevrolet Silverado heavy-duty was up 9% compared to a year ago, and the GMC Sierra heavy-duty was up 11%. Overall the Sierra had its best third quarter ever with more than 67,800 sold.

“While the economy has made a substantial rebound in the third quarter, retail auto sales have been even more resilient,” GM Chief Economist Elaine Buckberg said in a statement. “Super-low auto loan interest rates have boosted retail auto sales; yet more strength comes from pandemic-induced demand.”

Fiat Chrysler sold 507,351 vehicles during the quarter. Its profit-heavy Jeep and Ram brands were down 9% and 2% respectively. The Jeep Gladiator mid-size truck was the only Jeep to increase in sales, up 37%.

The Ram pickup’s retail sales rose 5%, but overall sales were down 3%. In the truck war battle, FCA’s Ram beat the Silverado this quarter with 156,157 sales versus Silverado’s 147,484. Silverado is still in the lead for the year so far. FCA is adding a third shift in its paint shop at Warren Truck to meet additional demand for the Ram 1500 Classic, the previous-generation truck, spokeswoman Jodi Tinson confirmed.

“The results reflect the hard work our dealers have done throughout the third quarter as they worked through the COVID-19 restrictions while still improving our sales over the prior months,” U.S. Head of Sales Jeff Kommor said. “Jeep and Ram are hot and we continue to prioritize deliveries to our dealers who are asking us to ship as many vehicles as we can build.”

Chrysler, boosted by a 32% increase in Pacifica minivan sales, increased sales by 8%. Alfa Romeo vehicles sold at a 17% higher rate. Dodge fell 31% and Fiat was down 53%.

Automakers have especially revved up their truck and SUV plants since the two-month shutdown, which cost automakers more than 3 million units of production, Chesbrough said.

Going into the fourth quarter there are typically a lot of consumers looking to buy new vehicle, particularly in the luxury market. But, he said, “There’s not going to be model-year 2021s out there, so are consumers going to hold off in purchasing to wait to get the latest and greatest products, or will they go ahead and buy anyway?” he said.

At one point this year, Ray Laethem Buick GMC in Detroit was down to about 15 GMC models in stock. To put that in perspective, there have been single days when the dealership sold that many GMCs.

“Now, luckily, there is an inflow and the minute that they come in, they’re just going quickly,” said Jeff Laethem, president and general manager for Ray Laethem Motor Village.

The demand comeback during the pandemic “was significantly higher …. than we ever anticipated,” he said. Customers replacing their leases definitely contributed to that, but Laethem said stimulus money likely helped the dealership make new vehicle sales.

“Another reason is because of the shortage in used cars also happened at the same time, those values went up significantly higher than they were before,” he said. “So, people who maybe owed more than the vehicle was worth, now they can get out of that car that they didn’t want to be in anymore because the used car values went up.”

Domestic carmakers were not the only ones to take a hit during the July to September period: Honda Motor Co. reported a 10% decline but noted double-digit gains in September. Nissan Motor Co, sales were down 32% in the quarter. Volkswagen of America reported a 7.6% decline.