Its net loss narrowed from $44 million to $23 million. On a non-GAAP basis, which excludes stock-based compensation and other one-time expenses, its net income jumped from $1 million to $62 million, or $0.11 per share — which surpassed expectations by nine cents. 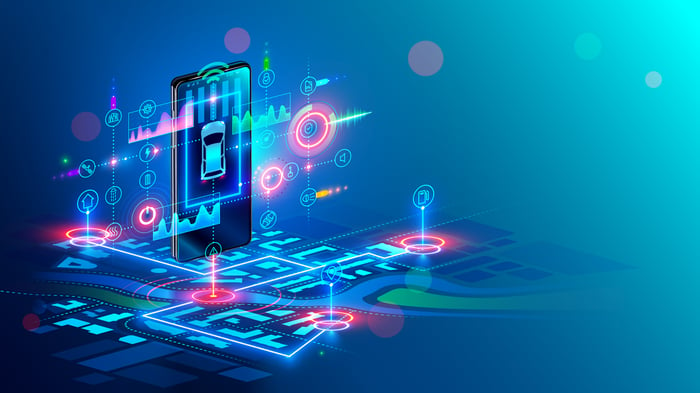 BlackBerry’s headline numbers marked a strong rebound from the first quarter, which had broken its five-quarter streak ofÂ adjusted revenue growth with a 20% decline. Its growth was supported by stay-at-home trends and a recovery in the automotive market, which was broadly impacted by the COVID-19 crisis.

Its software and services business is still declining

Over the past seven years, BlackBerry’s core strategy has been to eliminate its hardware business and expand its software and services segment by launching new products and acquiring companies like Good Technology, Encription, and Cylance.

During the second quarter, BlackBerry’s adjusted software and services revenue fell 15% year-over-year to $158 million, or 59% of its adjusted revenue, and marked the core business’ second straight quarter of declining revenue:

However, BlackBerry’s software and services segment’s revenue grew 1% sequentially on an adjusted basis and 2% on a GAAP basis. It attributed that growth to robust demand for Spark as more people worked from home, as well as sequentially higher demand across “all” its services except for QNX — which stayed roughly flat from the first quarter.

Yet that flat growth indicates the pandemic-stricken auto market could be gradually recovering. QNX already enjoys a commanding lead against Microsoft‘s (NASDAQ: MSFT) Windows Embedded as the world’s top automotive OS, and it secured five new auto design wins throughout the first quarter — even as the industry’s production volumes declined year-over-year.

Relying heavily on its licensing revenue

Meanwhile, BlackBerry’s “licensing and other” segment — which generates most of its revenue from its portfolio of over 38,000 patents — grew its GAAP revenue 42% year-over-year (and 86% sequentially) to $108 million during the second quarter.

That robust growth offset the sluggish growth of its software and services segment, and a higher mix of that high-margin revenue boosted its GAAP gross margin 470 basis points year-over-year to 76.8%.

But for the full year, BlackBerry expects its licensing revenue to decline 28% to roughly $250 million due to cyclically lower royalties and licensing fees. Therefore, BlackBerry will need to quickly grow its software and services revenue again to offset that incoming slowdown.

Betting on the automotive market’s recovery

During the conference call, BlackBerry CEO John Chen claimed the company’s software and services unit, excluding BTS, would generate “slight revenue” growth relative to the first half of 2021. As for BTS, Chen expects the segment’s revenue to “sequentially improve during the second half of the fiscal year and to return to its normal run rate” in early fiscal 2022.

That forecast relies on the recovery of the auto market, which should lift its QNX revenue with higher sales of connected cars. Several other major supply chain players, including JabilÂ and Texas Instruments, also recently claimed theÂ ailing automotive market was recovering.

Are brighter days ahead for BlackBerry?

The bulls believe BlackBerry’s QNX revenue will rebound and recent stay-at-home trends will buoy Spark’s growth. However, the bears will argue that BlackBerry remains unprofitable on a GAAP basis, relies heavily on “adjusted” non-GAAP metrics, and isn’t cheap at nearly 40 times this year’s earnings estimate.

BlackBerry’s business is stabilizing, but it still faces a lot of competition in the cybersecurity market, and it remains too dependent on the wobbly auto industry. Therefore, investors shouldn’t confuse the stabilization of BlackBerry’s business in the second quarter with a full-blown recovery just yet.

10 stocks we like better than BlackBerry
When investing geniuses David and Tom Gardner have a stock tip, it can pay to listen. After all, the newsletter they have run for over a decade, Motley Fool Stock Advisor, has tripled the market.*

David and Tom just revealed what they believe are the ten best stocks for investors to buy right now… and BlackBerry wasn’t one of them! That’s right — they think these 10 stocks are even better buys.