Under overcast skies, a scythe-wielding man dressed as the Grim Reaper led hundreds of masked protesters out of the gates of one of Germany’s oldest manufacturing sites in the Bavarian city of Nuremberg.

In what local unions termed “a declaration of war”, the Volkswagen-owned Man Group announced this month that it would cut 9,500 roles, more than a quarter of its workforce, and consider closing production sites across Germany and Austria.

After a summer in which the country’s car industry remained in suspended animation, the protesting staff at Man’s Nuremberg truck and bus factory are among tens of thousands of employees in the strategically-important sector whose jobs are in jeopardy.

Germany’s car industry supports more than 2m domestic jobs and directly accounts for more than 5 per cent of gross domestic product. It is concentrated in the states of Bavaria, Baden-Württemberg and Lower Saxony, whose economies are likely to suffer most from car manufacturers’ attempts to slash costs.

For Nuremberg, the proposed job cuts “would be a catastrophe”, said Markus Wansch, chairman of the works council at the MAN site in the city, where engines and vehicle parts have been manufactured for more than 150 years, and which still employs over 4,000 people in a working population of approximately 400,000.

The wider region in northern Bavaria has become the initial epicentre of the crisis, as Germany’s core industry tries to reduce personnel costs drastically in its home market. The job cuts come despite the fact that companies have enrolled millions of workers in the country’s Kurzarbeit furlough scheme.

We’re in a crisis . . . But the economy will go up again, and there will be new product lines that need to be staffed. We must be able to keep the people here [in the city]

In the past few weeks, parts supplier Continental said that a further 10,000 roles were “at risk” across the company, including at Bavarian sites, in addition to 20,000 job losses announced last year, while components group Mahle said it had “excess global capacity” of 7,600 roles and would cut at least 2,000 positions in Germany, including shuttering some plants.

Family-owned supplier Schaeffler, whose headquarters lie just 20km north of Nuremberg, plans to axe 4,400 staff, mostly in Germany, while further job losses are also expected at Munich-based BMW, in addition to an already-announced 6,000.

“Our industry is at the early stages of a fundamental change,” Man said, citing the costly technological shift from combustion engines to electric and hydrogen-powered vehicles.

Alongside this transformation, Germany’s car economy is grappling with a rapidly shrinking global car market, which is set to contract by a fifth this year, according to rating agency Moody’s.

Continental chief executive Elmar Degenhart has warned that “after roughly a decade of fast, profitable growth and workforce expansion”, the sector is about to experience its most severe crisis since the second world war, and will not return to the production levels it reached in the peak year of 2017 until 2025.

The relative importance of European manufacturing has been further diminished by the coronavirus pandemic; since the virus arrived in Europe, car sales volumes across the continent have dropped dramatically, but they have remained relatively stable in Asia.

In August EU car sales were 18 per cent below the same month last year, according to analysis by UBS, but rose almost 9 per cent year-on-year in China, where German carmakers generate the largest share of their revenues. 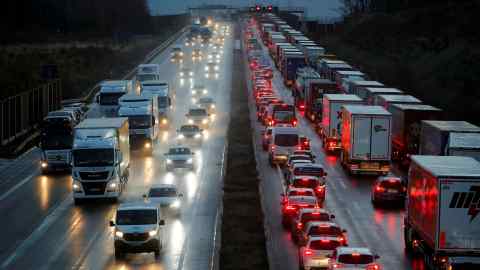 “When you have a broad and global customer base, localised production becomes more and more important,” Schaeffler chief executive Klaus Rosenfeld told the Financial Times. “In the past, most of the cuts we have done were predominantly outside Germany, now we are addressing Germany.”

IG Metall, the powerful union that represents the bulk of the country’s 800,000 automotive workers, alleges that companies like Schaeffler are merely using the crisis as an excuse to maximise profits.

However margins at the car supplier have been shrinking over the past few years, in part because of expensive investments in research and development.

While the shift to cleaner transport will create new jobs, the main beneficiaries could be countries with a younger, cheaper and equally well-educated workforce.

In an attempt to future-proof its economy, Nuremberg has speeded up the establishment of a new technical university, which will be situated in the heart of its industrial area and educate roughly 6,500 students a year. A state-funded hydrogen development centre has also been founded in the city.

“We’re in a crisis,” said Marcus König, Nuremberg’s mayor and a member of the Christian Social Union, a sister party to Angela Merkel’s CDU, speaking outside the Man plant during the protest.

“But the economy will go up again, and there will be new product lines that need to be staffed. We must be able to keep the people here [in the city] so we can get out of the crisis.” 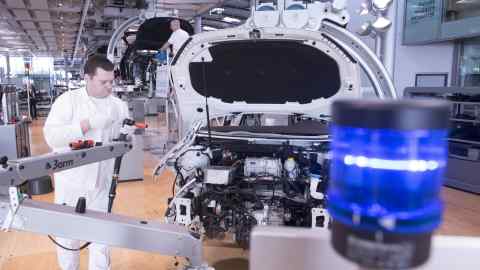 The wave of impending job losses in the car industry has led Bavarian prime minister Markus Söder, a potential candidate to succeed Angela Merkel as head of Germany’s conservative bloc, to renew his calls for subsidies to support companies’ and individuals’ purchases of new combustion engine cars and upgrades of commercial fleets — a request that has been repeatedly turned down in Berlin.

Armin Laschet, North Rhine-Westphalia’s prime minister and another contender for the leadership of the CDU/CSU, joined the fray last week, blasting Continental’s restructuring plans as “a form of cold capitalism that is not compatible with our social market economy”.

The fate of workers in the car industry, however, will depend more on how well Germany’s model of co-determination — the involvement of employees and unions in corporate governance — can withstand the twin forces of Covid-19 and the fundamental transformation of its most important industrial sector.

“We need a strong works council, who can fight back against management cuts,” said Martin, a 60-year-old technician who repairs diesel engines at the Nuremberg plant and has worked for Man since 1992.

“This has worked for decades, and I hope it still does.”