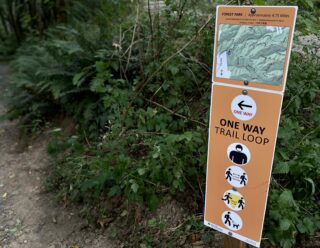 Where there’s a will, there’s a way.
(Photos: Jonathan Maus/BikePortland)

By Daniel Greenstadt, who previously wrote an article for us about the Off-road Cycling Master Plan.

In early August, the Portland Parks & Recreation Bureau decided to implement several one-way travel plans for a number of trails within Forest Park. Pointing to concerns about Covid-era trail users coming into close and frequent contact with each other on popular singletrack trails, the city released a set of recommendations for one-way loops. These restrictions applied only to pedestrians of course, because cyclists are already excluded from the park’s singletrack trails.

Nevertheless, the experiment – still ongoing – begs some questions and implies some answers about how trail users, including cyclists, can best be managed in the park.

For decades, the city of Portland hasn’t managed bicycles in Forest Park at all. Instead, it has simply banned them. While hikers, runners and dog-walkers have been the object of various management efforts initiatives, and capital investments including trail construction; various trail improvements; bridge construction; informative (but not great) signage; and interpretive programs, neither the city nor its main partners – the private Forest Park Conservancy and the Portland Parks Foundation – have worked on projects that specifically benefit cyclists.

Because virtually all cyclists are also pedestrians, hiker-centric projects are generally well-received by all, even if those projects have been at the expense of any improvements to cycling opportunities in the park. 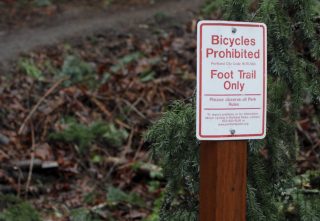 The important observation about these one-way loop initiatives, however, is that the city seems to believe the active management of trail users actually works and it’s their responsibility to make it happen.

Cities around the country and the world employ a wide range of tools and techniques to successfully manage pedestrian, bicycle, and even equestrian users on trail systems just like the one in Forest Park. Trail construction, trail improvements, trail retirement, trail segregation, one-way travel, day-on/day-off restrictions, good signage, public education, and so on, are just some of the common techniques.

But for some reason, none have ever been meaningfully applied to the off-road cycling problem in Forest Park.

Perhaps the COVID-inspired management measures taken by the city on behalf of pedestrian visitors can inform and encourage the city to begin directing management attention to bicycling as well. The Covid issue will, hopefully, disappear over the coming year or so. The bicycle access issue has been festering for 25 years. Portland should do better, even in difficult times.

— Daniel Greenstadt is Portland resident and long-time environmental and outdoor recreation advocate.
— Get our headlines delivered to your inbox.
— Support this independent community media outlet with a one-time contribution or monthly subscription.