Mercedes will focus on building cars for wealthier customers and cut a fifth of its costs over the next four years to finance new electric models, the German automaker said, as it seeks to catch up with US rival Tesla.

At a virtual conference for investors on Tuesday, the Daimler subsidiary said it would grow its super-luxury Maybach and G brands, as well as its AMG sports car division, and develop emissions-free versions of vehicles in those ranges.

It also announced the development of a bespoke platform for small and medium-sized battery-powered vehicles, called MMA, which will compete with the architecture on which Volkswagen’s ID. 3 is built.

Daimler already has a similar platform for larger cars, known as EVA.

The premium manufacturer’s shares have staged a strong recovery in recent weeks, returning to pre-coronavirus levels as investors hailed the resilience of demand for premium products and encouraging sales data from China, which is Mercedes’ single largest market.

Earlier on Tuesday, Mercedes reported that its retail sales in China had grown more than 23 per cent from July to September, when compared with 2019 levels, while sales in North America slumped almost 10 per cent.

However, profits at the Stuttgart-based group have long been weighed down by billions of euros in costs relating to allegations surrounding the carbon emissions of diesel models, and high fixed costs.

Daimler retains a large workforce in Germany, where labour is much more expensive than in other developed economies. 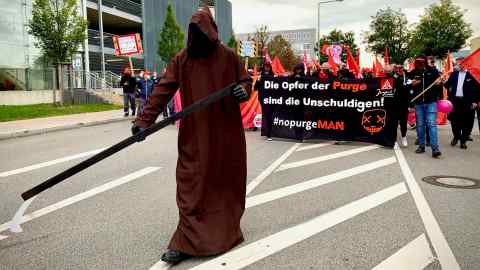 Chief executive Ola Källenius reiterated that the company would cut research and development spending and slim down its product range, in order to reduce its break-even point.

“Our strategy is designed to avoid non-core activities,” he said, emphasising that Mercedes would invest in more profitable, luxury models.

“We’re not chasing volume, we’re targeting profitable growth,” he added, but declined to identify which models would be discontinued.

The company’s management said it was aiming to achieve profit margins in the “mid to high single digits” by 2025, even if the global car market continued to suffer, and Mr Källenius said that Daimler was within “striking distance” of meeting strict EU-mandated carbon emissions targets over the next couple of years.

“Daimler addressed the key areas in which they have been lagging and there is a clear framework for the next four years,” said Patrick Hummel, an analyst at UBS.

“Over the next several months, the market will focus on [EU] CO2 compliance and the profit margin trajectory in this new-normal world.”

Arndt Ellinghorst, an analyst at Bernstein, said Daimler’s management were “100 per cent accountable when it comes to delivering efficiency gains”, having committed to cutting costs by 20 per cent regardless of the economic environment.

“That is really refreshing.”