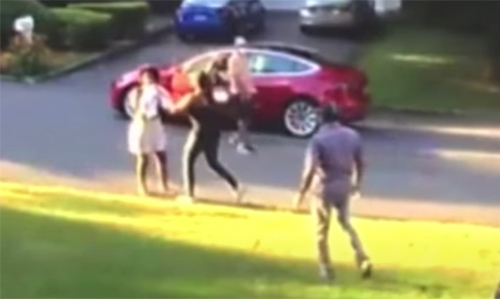 The wounded woman fled the car, pursued by her attacker, and her hand was slashed in a subsequent scuffle.

Video from a home surveillance camera shows the bleeding woman staggering on the suburban street. A passing driver stops to offer help at about the same time as the home’s owner steps onto her porch while talking to a 911 dispatcher. More neighbors approach, cautiously.

Then another woman comes onto the scene, dressed in a black top and tights. She walks toward the victim, saying, “I’m a doctor.”

The homeowner calls out, “You’re the one who attacked her! You ran away.”  Then, recognizing her neighbor Alika Crew, she tries to reassure the victim, confirming: “She’s a doctor. She’s a doctor.”

The panicked victim yells, “Please, please stop!” as the woman in black physically restrains her.

The homeowner later told a TV reporter that when she called 911, the dispatcher said the incident had already been reported — as a dog bite.

When police arrived, Crew was still on the scene, and she was arrested then.

The other woman was taken to the hospital with injuries that required surgery. Investigators say the weapon was a razor blade.

Crew practices orthodontics at clinics in Queens and Stamford, Conn.