Bicyclists ride along on a slow street on MLK Drive past the Murphy Windmill in Golden Gate Park.

Bicyclists ride along on a slow street on MLK Drive past the Murphy Windmill in Golden Gate Park.

Panhandle to the Pacific: A car-free route opens in Golden Gate Park

San Francisco expanded its Slow Streets program recently with the opening of the final link of a car-free route through Golden Gate Park, enabling a cyclist, jogger or hiker to pass from the Panhandle to the Pacific without coming into contact with an internal combustion engine.

People on two legs, and on two wheels, were predictably ecstatic. People in four-wheeled vehicles — at least some of them — were hotter than a crankcase.

“This,” said cyclist Trevor Gould of San Francisco, coasting down Martin Luther King Drive toward the largest ocean in the world, “is wonderful. What a great freedom, not to have to worry about getting run over.”

“Our quality of life just went up,” said Justin Davis, who was pushing his 9-month-old son, Levon, in a jogging stroller.

Late last week, park workers posted “Road Closed Except Authorized Vehicles” signs along a 1.8-mile-long stretch of MLK, Overlook and Middle drives. Those closures connected with the existing closure of a 1.4-mile stretch of John F. Kennedy Drive in the eastern end of the park, completing the car-free route.

The new route through the park joins at the western end with a 2-mile stretch of Great Highway that has also been closed to cars — establishing a car-free path from the middle of San Francisco to the San Francisco Zoo in the southwest corner. About all the park department was unable to do is eliminate the uphill pedaling required for an eastbound park cyclist, or pave over the notorious potholes on MLK Drive.

“Exercising and playing outdoors lift our spirits during these challenging times,” said Phil Ginsburg, general manager of the Recreation and Park Department. “We’re delighted to open even more space in our park.” 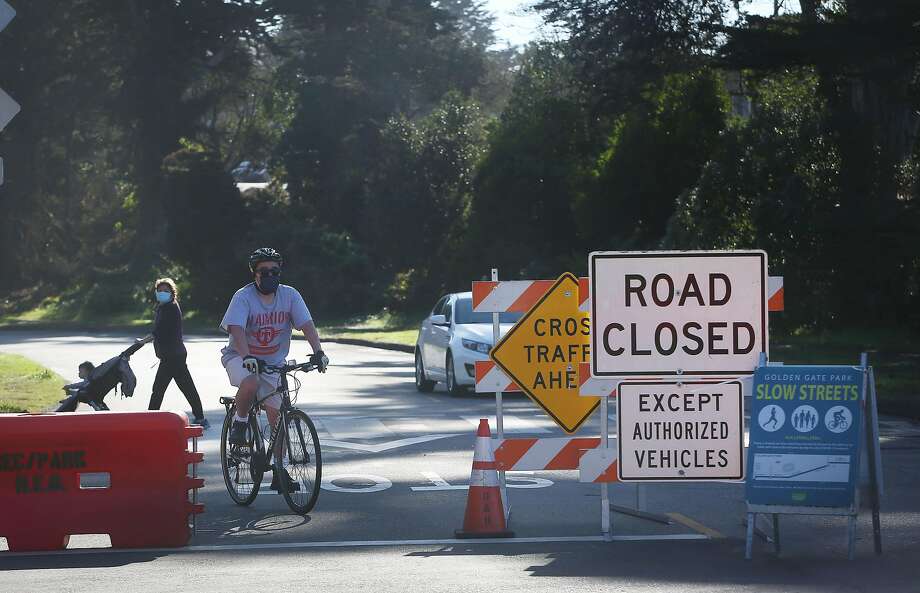 A bicyclist rides past signs at the intersection of MLK Drive and 41st Avenue.

Apparently, motorists are not so delighted, at least the in-a-hurry ones. At the intersection of MLK and Chain of Lakes Drive, many drivers arrived with their turn signals blinking, only to find that turning onto MLK Drive was no longer allowed. Their vehicles were not the “authorized” kind.

“This is terrible if you’re in a car,” hollered one man in a white minivan, who declined to give his name. “Score another one for the bikes.”

More than one driver paused in the middle of the road to consult a GPS device, which had evidently not yet gotten the word that MLK was closed. There was some polite beeping.

And there are a few spots along the route — near the Murphy Windmill, near South Lake and on Transverse Drive — where pedestrians and cyclists are obliged to coexist ever so briefly with cars. Those are well marked with signs and barricades.

The new park route means that it is theoretically possible to ride from the Ferry Building to the Pacific on a car-free route, using Market and Page streets to reach the park. But the presence of buses and commercial vehicles on Market Street, and the crossing of dozens of busy intersections, make the full crosstown route a far cry from a leisurely bike path. And the challenging hills of Page Street are not for beginners.

Park ranger Evan Gataveckas, enforcing the new no-car policy on MLK Drive, said motorists had been cooperative and he had yet to write a ticket, although he does hold that tool in reserve as a last resort.

“I think the closure is a great idea if it keeps people healthy,” he said.

The new park route is the latest among 30 corridors around the city in the Slow Streets program. Some of the longer stretches are on parts of Kirkham, Ortega, Shotwell, Sanchez and 20th streets.

Cyclist Benjamin Wolak was trying out the new stretch in Golden Gate Park on his way home from a dental appointment. He said he doesn’t really mind going to the dentist, but the car-free trip home helped anyway.

Wolak used to commute by bike from the Richmond District to his software engineering job downtown. Now he works at home. As soon as the bike route got more bike-friendly, he said, he no longer needed it for commuting — “sort of a Catch-22,” he said.


Still he called the new street closures a “step in the right direction” for San Francisco and his hobby.

“Too bad it took a pandemic to make it happen,” he added.