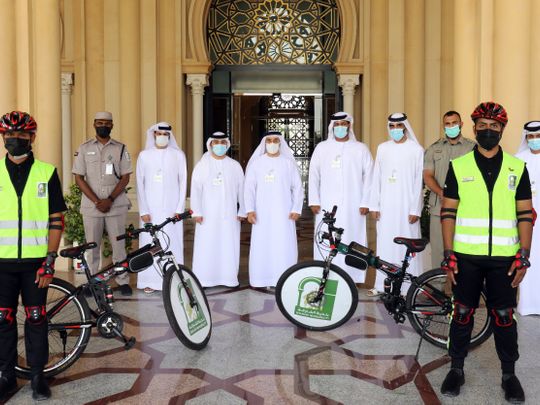 Sharjah: Sharjah Municipality has launched bicycle patrols for the beaches of the city of Sharjah and green spaces in order to educate its users and urge them to adhere to preventive measures. The movement aims to enhance its monitoring and awareness role on beaches and green spaces.

Thabit Al Turaifi, Director General of Sharjah City Municipality launched the first stage, which included five patrols and they were launched from the main building in Al Musalla area. A number of municipality staff attended the ceremony.

Al Turaifi said that the bicycle patrols enhance the monitoring role of the municipality on the beaches of Sharjah, which is characterised by the availability of special lanes for such bicycles, through which the municipality promotes awareness among the public of the importance of adhering to all the instructions and preventive measures it has put in place in beaches, and creating positive interaction with them. These patrols also reflect the municipality’s keenness to preserve the environment.

Al Turaifi explained that the Sharjah Municipality was keen to maintain all beaches, raise security and safety standards for its visitors, and engage a rescue company specialised in beach management, which is a pioneer in its field. Safety standards have also been developed in coordination with the Sharjah Police General Command, and patrols of the municipality’s inspectors are present to follow up on the protection and safety of beach goers, They have been reinforced by bicycle patrols.

The municipality has also provided beaches and green spaces with signboards that include many instructions and preventive measures related to COVID-19, such as wearing masks on the beach at all times, maintaining a safe distance of no less than two metres, and leaving a distance of four metres between each group of people. and other health guidelines and preventive measures that the municipality works continuously to urge the public to adhere to for the sake of their health and safety.

Khalid bin Falah Al Suwaidi, Assistant Director General of the Customer Service Sector, explained that the five bicycle patrols launched in the first stage have been equipped with all preventive and safety equipment, and qualified inspectors have been assigned to drive these bicycles. They have also been enrolled in courses of providing first aid and can deal with any emergency situations on the beach to enhance safety levels among community members.