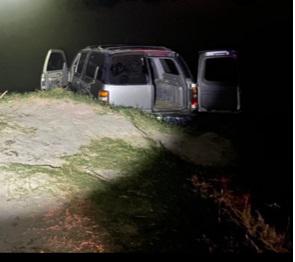 A suspected smuggler drove a vehicle loaded with marijuana into the river in the area of El Cenizo.

On Wednesday evening, agents observed several people crossing the river with bundles toward a park in El Cenizo. They loaded the bundles into a gray sport utility vehicle that approached the area. The vehicle then exited the park. When agents tried to pull over the vehicle, the driver refused to stop.

After a short pursuit, the driver drove back to the river and plunged the vehicle into the water. Two occupants of the vehicle returned to Mexico.

Agents recovered four bundles of marijuana from the vehicle. The marijuana weighed approximately 300.16 pounds and had an estimated street value of $240,124. The narcotics were turned over to the Drug Enforcement Administration. Border Patrol seized the vehicle.

“Smugglers continue to use dangerous and reckless tactics like this, putting criminal profits in front of public