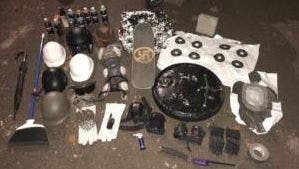 Portland police found items “consistent with” those used during unlawful civil unrest and riots after searching a vehicle near a demonstration in the Oregon city, authorities said.

Officers with the Portland Police Bureau spotted a car that was “creating a hazard” on Wednesday night near the Penumbra Kelly Building in the city’s southeast section, authorities said in a Thursday morning press release.

As police approached the vehicle, they discovered “several soup cans on top of the vehicle,” which police suspect appeared to have been intended to be thrown at officers.

“Inside the vehicle were several items consistent with what crowd members have used during previous unlawful assemblies and riots,” police said in the summary of events. “These items included shields, helmets, gas masks, CO2 cans, and paintball guns (photo).”