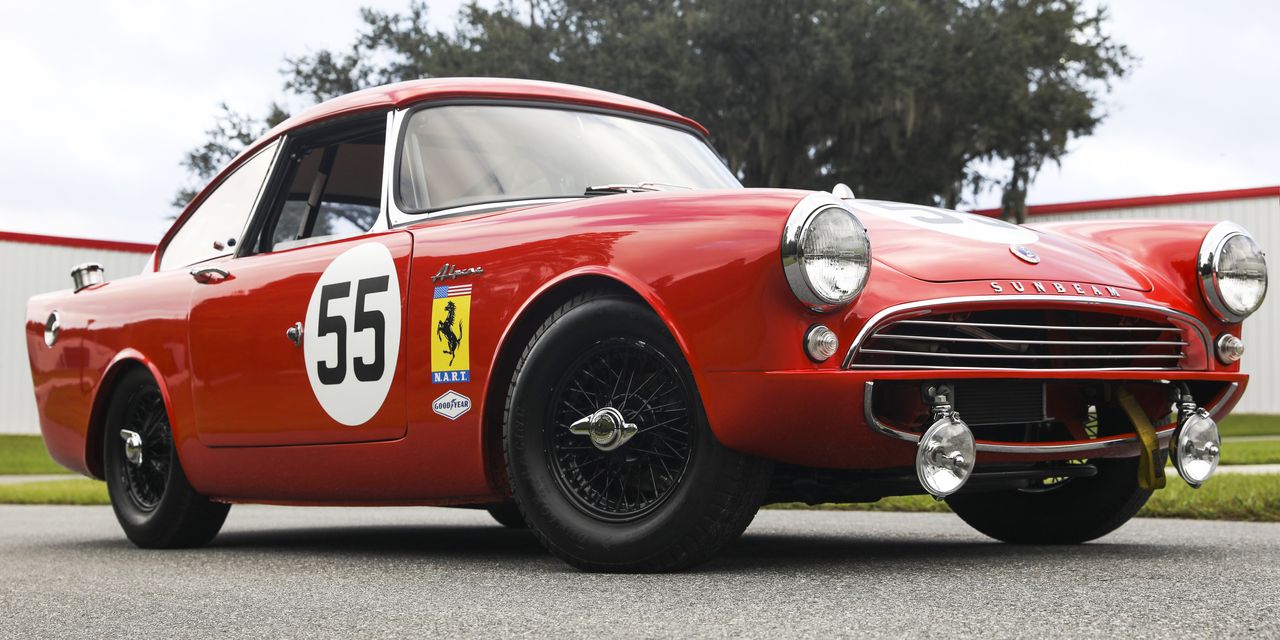 I forwarded the Facebook post to my friend Steve Uiterwyk, who had done some business with the auction company, RM Sotheby’s. He responded right away: “Call me.” I went out into my living room and called him. He said, “I got good news and bad news. The good news is, the car hasn’t sold yet. The bad news is, the auction is going on right now. The bidding is already past $50,000 and climbing fast. What do you want to do?” I had to make an instantaneous decision. These auctions happen very quickly. I said, “Let’s jump in.”

In the 1950s and 60s, Mr. Heacock’s family was involved in organizing the 12 Hours of Sebring race. Mr. Heacock has become fascinated with cars that competed in that race, such as this 1961 Sunbeam Harrington Alpine.

In the 1950s and 60s, Mr. Heacock’s family was involved in organizing the 12 Hours of Sebring race. Mr. Heacock has become fascinated with cars that competed in that race, such as this 1961 Sunbeam Harrington Alpine.

For me, this car was very special. When I was growing up, my grandfather was one of the head organizers of the 12 Hours of Sebring. For a time, my father was the race’s financial officer. Every March when I was growing up, the entire international sports-car racing world came to our tiny town in Florida for a race held on a World War II airfield that had been decommissioned. It was an absolute circus.

As a kid, I had access to everything, and I met the greatest drivers in the world during that era, which is often called today the golden age of racing. Stirling Moss and Juan Manuel Fangio and Phil Hill—all my heroes. I later became highly involved in vintage racing. I started a magazine called Vintage Motorsport, which still exists, and the Sportscar Vintage Racing Association, still today one of the largest vintage racing clubs in America. I started an insurance company called Heacock Classic to insure vintage cars and race cars.

I’ve now sold all those businesses, and in my retirement I have become interested in vintage cars that raced at Sebring. So you can see why the car being auctioned off by RM Sotheby’s rang all the bells for me. It had real Sebring history. I have always been a fan of British racing cars, and this one was exactly that.

But the coolest thing was this: In 1963, the car had competed with Ferrari’s North American Racing Team (N.A.R.T.), because its owner was an advertising man who handled Ferrari’s account. The N.A.R.T. team slapped Ferrari’s logo on it. To my knowledge, this car is the only British racing car ever to compete with a Ferrari logo.

Back to the auction. The price was going up fast. I was on the phone with my friend Steve. I said, “Let’s do one more bid.” And that was the bid that won this car. From the time I saw it on my phone until the time I bought it, 15 minutes had passed. I had never done anything like that in my life—spent six figures on an impulse buy.

Two weeks later, the car arrived. I displayed it at the Amelia Island Concours d’Elegance, but right after that, Covid hit. Hopefully when things return to normal, I can display it at the 12 Hours of Sebring next year, and I’ll do some vintage racing in it. But I enjoy just looking at it and thinking about the memories it conjures, of my father, my grandfather, my heroes, and my past.