The UK’s new car market suffered its worst September in two decades, as economic uncertainty hampered trading in the second busiest month in the dealership calendar.

Just 328,041 cars were registered in the month, the lowest since 1999, when the licence plate system was introduced that turned September and April into totemic sales months because of their new plates.

Sales were 4.4 per cent lower than a year earlier, a modest drop that masks the extent of the fall because September 2019’s sales were unusually low, according to figures from the Society of Motor Manufacturers and Traders.

Last month’s figures were 15 per cent below the typical September average over the past decade, the SMMT said.

“This is not a recovery,” said Mike Hawes, SMMT chief executive. “Unless the pandemic is controlled and economy-wide consumer and business confidence rebuilt, the short-term future looks very challenging indeed.”

Many in the industry had been banking on the month, which always follows quieter trading over the summer, to give an indication of the health of the market.

September’s decline means the industry has “little realistic prospect” of recovering all the sales lost earlier in the year due to the pandemic, and is likely to see overall sales fall by 30 across 2020, the SMMT said.

The industry has so far shied away from calling for specific economic measures to boost car sales, such as a scrappage scheme, but has warned about wider economic measures having an impact on consumer confidence.

“Consumer and business confidence is threatened by the forthcoming end of the government’s furlough scheme, an expected rise in unemployment and continuing restrictions on society as a result of the pandemic,” Mr Hawes added. 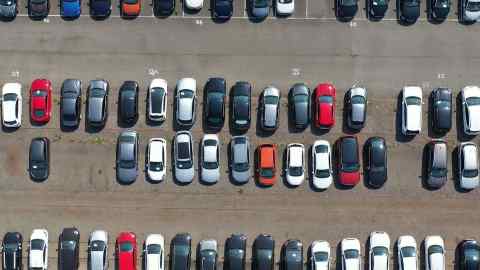 Electric car sales, which have been rising steadily as new models are released by manufacturers trying to hit European CO2 targets, almost tripled compared with a year earlier, up from 7,704 to 21,903.

Every category of hybrid — from plug-in hybrids that can travel a significant distance on electric power to “mild hybrids” that always use a traditional engine alongside a battery — saw sales rise. Petrol and diesel models both recorded lower sales.

“Sales of new electric vehicles are likely to have been bolstered by the new models which have been launched this year, giving consumers more options to choose from,” said Ian Plummer, Auto Trader commercial director.

“The challenge is, however, whether we can double each year beyond this one” in order to reach the government’s “ambitious plan” to ban the sale of new petrol and diesel cars in the next decade, he added.