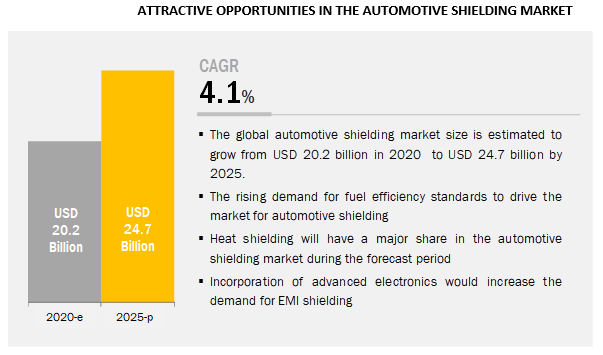 The global Automotive Shielding Market size is projected to reach USD 24.7 billion by 2025 from USD 20.2 billion in 2020, at a CAGR of 4.1%. The growth of the market is driven by increased adoption of electronics-based safety systems and the growing demand for fuel-efficient vehicles.

Increasing focus on active safety systems and car assessment programs would drive the demand for ECUs in modern vehicles. Similarly, more such ECUs and other sensors would require superior EMI protection. The increasing number of accidents due to distraction and alcohol-impaired driving fatali ties has become a major concern for lawmakers. In 2018, out of total 36,560 fatalities in the US, 10,511 were alcohol-impaired. Distraction affected fatalities reached 2,841 in the US in 2018, accounting for 7.8% of the total casualties for the year. Such instances have sparked the demand for advanced safety features such as driver monitoring systems, automatic emergency braking, lane departure warning, and many others. In addition, upcoming mandates and safety awareness have led to the adoption of advanced control modules.

Governments in European countries and the US have mandated the use of AEB in vehicles. For instance, Regulation No. 661/2009 of the European Parliament and Council mandates the introduction of advanced emergency braking systems. The systems were mandated in all new commercial vehicles above 3.5 tons and buses in November 2013 and in all vehicles sold in the European Union in November 2015. In addition, 40 European countries agreed to standardize and lay down technical specifications for advanced AEB systems at the United Nations Economic Commission for Europe (UNECE) in 2019. These specifications will lay down the foundation of vehicle-to-vehicle, and vehicle-to-pedestrian AEBS (Advanced Emergency Braking Systems) fitted on cars. Such developments would surge the demand for EMI shields for advanced automotive electronics during the forecast period.

To speak to our analyst for a discussion on the above findings, click Speak to Analyst

To view the original version on ABNewswire visit: What is the impact of developments in autonomous driving on the automotive shielding market?